What is en Papillotes cooking?

Although it isn’t something most people hear every day, we’ve come to love this method of cooking! En papillote means “in Parchment” in French. Pretty fancy, right? It might sound that way, but it’s actually a very simple cooking method to master. Basically, you just steam small portions of food in the oven using a parchment packet. The idea is similar to tinfoil dinners (we love these for camping!), but you bake rather than cook over a fire. In addition, the aroma from the steam when you open your parchment packets smells amaaaazing!

Can you prepare papillotes in advance?

If you think you’ll be pressed for time before dinner, you can prepare papillotes an hour or two ahead of time. This makes them great to serve if you’re having guests.  First, cut and prepare your parchment packets. Second, fill with your desired ingredients. Finally, carefully fold to seal the papillotes and store under refrigeration until ready to cook.

Can you cook en papillote in the microwave?

Sure, papillote recipes can be made in the microwave, and fish cooks especially easily and quickly.  For best results, thinly slice vegetables so they will cook as quickly as the fish.  The fish is typically done in just 2 minutes. If it needs additional cook time, use small increments so as not to overcook.

What can I serve with my Shrimp en Papillote?

Even though our Soy and Ginger Shrimp en Papillote is delicious on its own, we love an excuse to make a good side! If you’re wanting a low key dinner, just serve with Wing Hing Yakisoba noodles (#9176), steamed Minute White Rice (#1468), or one of our riced veggies.  But, if you have more time for your side dishes, try making some fried rice (or use our Amoy Fried Rices), or Easy Chicken Lo Mein.

If you like this recipe, you may also want to try: 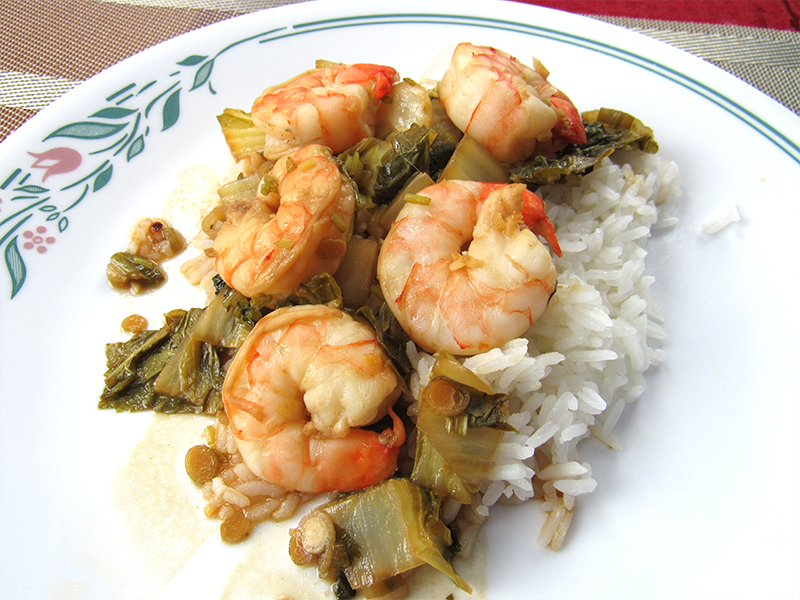 In this simple recipe, bok choy and shrimp are infused with the delicious combination of Asian-inspired flavors. Plus, this delicious en Papillotes recipe will be on the table in less than 30 minutes.